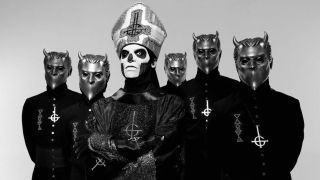 Ghost have released a video for their track From The Pinnacle To The Pit.

It is taken from the Swedish occult rockers’ latest album Meliora, which was released last month.

One of the band’s Nameless Ghouls told TeamRock that From The Pinnacle To The Pit is the album’s “fist in the air” track. He said: “I felt there was a place for a track like this on the album, a track with this level of intent. Sometimes simplicity is a good thing, that straightforward punch to the nose.

“With the last album, some of the songs, even the more straight-ahead ones, weren’t always easy to bring into the live set, but with Pinnacle, once we started working on the demo, it just took on a life of its own.”

Ghost have an eight-date UK tour lined up for December.