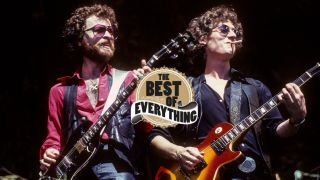 “Looking through a list of Blue Öyster Cult’s material, certain songs jump out at me, and none are the so-called hits!” says Eric Bloom of his challenge. “There’s nothing wrong with our big songs, of course. But maybe I’ve played them too many times. Those songs are great, and I probably wouldn’t have been asked to do this list at all without (Don’t Fear) The Reaper and Burnin’ For You. But I’m jumping into the list without including any of those, and probably with some trepidation since many of these were written by me. But that makes them special as far as I’m concerned. So, here they are, in no particular order.”

“This comes from the Spectres album. It was written by myself with Ian Hunter. We did this in my basement. For me, it is just a nice poppy kinda tune. But whenever I hear this, it brings back great memories of spending an afternoon writing it with a good friend. I’m also very happy that Bonnie Tyler decided to cover it on her album Faster Than The Speed Of Night.”

“We did this song for The Revolution By Night album. It was co-written by myself with Aldo Nova. What happened was that Aldo gave me a cassette – yes, old technology! - of the track as he envisioned it, and I then wrote the lyrics to go with this. It is a great track and holds up well today. The way I wrote the words was as a message …‘C’mon, take me away’. If you think about the movie Cocoon, then you’ll get what I was going on about here.”

“Again, from Spectres. This is a great tune written by guitarist Buck Dharma. It is a haunting, yet nicely produced song. The thing about it is that this is very tough to play live. Even now, we find it hard to get right on stage. Still, we do occasionally nail it.”

“We did this for the Cultosaurus Erectus album. It was co-written by myself, John Trivers and Michael Moorcock, and was based on Moorcock’s books. Mike was sending me lyrics by mail (way before the internet, folks). I had sent him a fan boy letter, and we had then met for lunch, which led to us collaborating on three songs in the end. And we always did it the sane way, via the post. This song was inspired by the epic story of Elric Of Melnibone and his sentient weapon.”

“This was something we did for the Fire Of Unknown Origin album. Like Black Blade, it was written by myself with Michael Moorcock. And again, it was done the same way, with him sending me lyrics in the mail. It was also based on his books, and luckily for us it was chosen to be included on the Heavy Metal animated film soundtrack.”

“This is from the Heaven Forbid album. It written by myself and Buck, with the lyrics coming from John Shirley (like Moorcock, another fantasy writer) because this comes from one of our later albums, a lot of people don’t know this tune, which is a shame. Because to be blunt, it rocks like fuck. And we do sometimes play this one live.”

“This is from the Agents Of Fortune album. Recently on tour, we’ve been playing the whole of that album live. What it’s done is reawaken in me an appreciation for the songwriting abilities of the late Allen Lanier, (keyboards, guitar), who came up with this track. When you revisit songs like this, it makes you realise how good Allen was, and how much he gave to our catalogue.”

“This comes from the Mirrors album. And was again written by Allen. Rediscovering his tunes has been both refreshing and sad at the same time (Lanier died in 2013). Knowing him so well, he wrote as a true artist. It would be easy to also include In Thee on this list. That’s another track from Mirrors. There, I’ve mentioned it now.”

“A song from the Club Ninja album. This is just a very clever Buck tune. And it’s always fun to play. Mind you, it’s tricky to do live, but when it’s done right in front of a hardcore crowd of fans, it’s always a winner.”

“This is another tune from Cultosaurus Erectus. It’s a Buck tune, but with a contribution from me and lyrics which were written by Richard Meltzer (rock critic and performer). The lyrics are rather loony, actually. They’re supposedly drug-influenced: ‘The night that I saw lips in the hills’. What does that mean? But who cares! This track rocks great, with a terrific walking bass line from Joe Bouchard.”