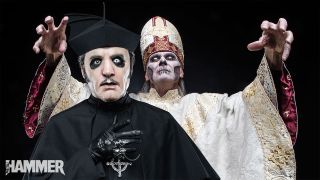 The band Ghost have long been shrouded in mystery. With each passing album, a different ghoulish priest has entered the Ghost family to front the band, starting back in 2010 with Papa Emeritus I. Then, with new album Prequelle there was no numbered Papa to be found – just a Cardinal and mysterious ancient figure known as Papa Nihil. So, we look back on the long and complicated history of the most confusing and theatrical band going.

If you're new to the lore of Ghost, allow us to help you...

AKA: The first one.
Years Of Service: 2010-2012.
Notes: Papa Emeritus I was the OG Ghost frontman and could usually be found stalking back and forth on stages wielding his trusty thurible (that’s that big, swinging incense burner thingy he used to have). The original, certainly, but arguably not the best.

AKA: The scary one.
Years Of Service: 2013-2015.
Notes: With a far ghastlier looking visage than his predecessor, Papa Emeritus II was also the first Papa to ditch the makeup when he fronted a special, three-song Ghost set for an Australian website in 2014. Though we’re still not convinced that was his real face, either.

AKA: The dandy.
Years Of Service: 2015-2017.
Notes: Allegedly the younger brother of Papa Emeritus II, Papa Emeritus III brought a new energy to Ghost, shrugging off his Papal robes mid-set for a snazzy suited-and-booted look that came with a host of sexually charged stage moves. Oooh, the cad.

AKA: The old one.
Years Of Service: 2017-Present
Notes: Making his stage debut seconds after Papa III was removed, Papa 0 looks older than time itself. His role is seemingly to mentor and welcome his imminent successor. What happens once he is properly replaced?

AKA: The new guy.
Years Of Service: 2018-Present.
Notes: A future Papa? The origin of a Papa we’ve seen before? Only Tobias Forge knows – and he’s not telling – but for the first time, we have a character who doesn’t fit into what we already know of the Ghost story. We’ll have to wait and see what his future holds…

AKA: The band.
Years Of Service: 2010-Present.
Notes: Less individuals and more a mass of souls represented onstage by mysterious, anonymous figures. While we have had five on them onstage to this point, it looks like we may be about to get more Nameless Ghouls for our buck.

AKA: The matriarch.
Years Of Service: 2016-Present.
Notes: A figurehead behind the scenes, the mysterious Sister Imperator has appeared in a number of videos put out by Ghost in recent years. Her ultimate role remains to be seen, but Tobias describes her and Papa Nihil as the “mum and dad” of the operation.

AKA: The main event.
Years Of Service: 2010-Present.
Notes: The mysterious cult from which these strange beings all stepped forth, The Clergy is the centre point for everything that Ghost is, was and shall be. They remain anonymous, omnipotent and powerful. Which is metal as fuck, to be fair.