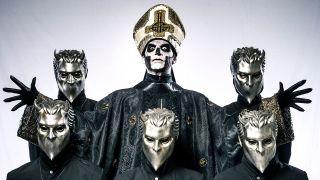 How have Ghost been since we last spoke?

“We’ve been very busy! We spent this whole year on the road and in between tours we’ve managed to record the Popestar EP. However, all the release campaigns that we had planned were going wrong [details of the EP briefly leaked] so we had to quickly conjure up new ones. Unfortunately, sometimes things leak these days, so all of a sudden you’re set back to zero.”

How did you get out of that pickle?

“Fortunately we have a lot of people working with us so our new plans turned out quite well. We’re lucky that we’re a touring band and if there’s a leak, it doesn’t necessarily affect us. Dropping the EP so quickly was a gamble that we could afford to take because it’s not a full album that’s taken a year to put together.”

So where did Popestar come from? You did a bit of a Beyoncé and suddenly dropped it.

“It looks like we’re following a pattern of album-covers EP-repeat but that wasn’t the plan. When we went into the studio for Meliora, our producer [Tom Dalgety] wanted us to focus on the album and record any covers afterwards. One song didn’t make it on to the album because it wasn’t done in time and it eventually became Square Hammer. I felt very strongly about it and we agreed we needed to release it, so suddenly we were recording a covers EP that’s Square Hammer and four B-sides to accompany Meliora’s singles.”

Where does that place Popestar in your legacy?

“Square Hammer’s a good song that we’re most likely going to play forever now. It’s the opening track of our current tour, so it definitely feels like a Ghost classic. Obviously there’s been a lot of work put into the covers on Popestar but it’s not as serious and thematic as a whole record, it’s not trendsetting for our new sound. Popestar is the offspring of the Meliora cycle, so when you hear our new album a year from now, it’ll continue from Meliora and not Popestar.”

Any plans for Halloween?

“We’re playing Little Rock, Arkansas on Halloween but the night before we’re heading to our pyro guy’s haunted house in New Orleans which he started with Phil Anselmo [House Of Shock]. I’m childishly drawn to anything ghoulish so nothing beats a good Halloween party. It does get a little worn when I’m doing it every day onstage – I’m no longer impressed by red smoke and spooky sounds. For the last few years we’ve been playing on Halloween so I’ve missed out on dressing up as anything but a Ghost member. Out of all the commercial holidays, Halloween is the best.”

Did you watch a lot of horror films growing up?

“I grew up with an older brother and that’s never good, so I was only three years old when I saw my first horror movie. It was called The Funhouse, about a bunch of kids breaking into one of those typical American funhouses you find on the end of the pier. There’s a part where this big plastic clown comes out of nowhere to get them – it’s that sort of shit you see everywhere these days, but it was terrifying to me as a kid. I was nine when I asked my mum to rent It on VHS when I was home sick from school one time, and that clown was one of the scariest things I’ve ever seen. I admit I now have a slight fear of the dark – and I guess that’s why I’m doing what I do. I have a strange fascination with horror, but I can’t live alone in a house, I need to live in a city apartment with noise. I still love watching horror movies, but I rarely do it on my own!”

From cult heroes to global phenomenon: the unstoppable rise of Ghost