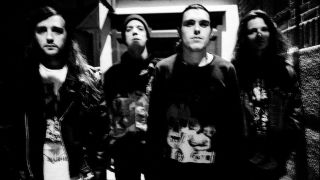 Full Of Hell have announced that their new album will be released later this year.

Recorded at God City Studios with Kurt Ballou, Trumpeting Ecstasy will launch on May 5 via Profound Lore.

Full Of Hell’s last release was 2016’s One Day You Will Ache Like I Ache which was a collaboration with The Body.

Last year, Full Of Hell and The Body released a cover version of Leonard Cohen’s The Butcher.

Explaining the reasons behind the choice of track, vocalist Dylan Walker told Metal Hammer: “We chose to cover The Butcher because Lee Buford, drummer for The Body, and I have been fans of Leonard Cohen’s work for as long as we can remember.

“I remember a day not long after we had decided that we would collaborate, I was driving home from work listening to Cohen and singing along with The Butcher.

“I saw a parallel in my mind between him and The Body. It was so obvious that I couldn’t believe I hadn’t heard it before. I truly believe that Cohen channels so much in that song that’s it the same essence that makes The Body great.

“The Butcher is epically tragic and morosely stark.”

Full Of Hell are expected to announce summer tour dates in due course.