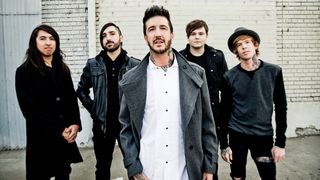 Of Mice & Men with Austin Carlile

Of Mice & Men guitarist Alan Ashby has spoken about the circumstances surrounding the departure of frontman Austin Carlile.

The singer recently claimed that one of the reasons he quit in December was because “they weren’t going to let me write what I wanted on next record.”

But in a tweet appearing to respond to Carlile’s comments, Ashby says: “Just because someone says something on the internet does not make it true. #AlternativeFacts.”

Then, when asked by a fan if it was true that bassist Aaron Pauley had kicked Carlile out of the band because the singer had wanted to introduce “more religious lyrics” into the material, Ashby was quick to respond.

He says: “Guys, nobody kicked anybody out. Austin has always used religious influences in his lyrics. Stop making shit up!”

Carlile, who suffers from Marfans Syndrome, announced his departure from Of Mice & Men in late December.

He issued a statement saying: “This is what I love, music is where I found myself, but these three tears in my spine, plus a fourth that occurred the year prior, were signs that I was absolutely not able to scream any more.

“My team advised me that if I continued to do so, it would cause ‘permanent and irrevocable damage’ to my spinal cord and nervous system.”

But in a recent Instagram post, he indicated that his hand was forced, saying: “I will no longer be writing with them – one of the reasons I left. They weren’t going to let me write what I wanted on next record. That’s not gonna happen. I will write what I want despite what that means giving up.”

Of Mice & Men are continuing as a four-piece and have several shows and festival dates planned over the coming months.