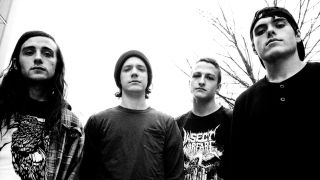 Fans of extreme music aren’t the easiest bunch to impress, but when it comes to flat-out sonic insanity, Maryland turbo-grinders Full Of Hell are way ahead of the pack. It helps that their new album heralds a new partnership with Masami Akita, better known as Merzbow, the king of electronic savagery.

“We met the amazing drummer [and Merzbow collaborator] Balázs Pándi at a show in New York,” vocalist Dylan Walker explains. “He insisted we keep in touch. Through that we met Masami Akita.”

Full Of Hell & Merzbow is an inspired meeting of minds that, as Dylan hopes, promises to become even more terrifying when the two camps join forces for live shows in the near future.

“I like to compare it to food,” says Dylan. “You have to develop your palate to be able to enjoy such extremes in flavour or, in this case, sound. Maybe you could compare listening to an artist like [industrial pioneers] SPK to eating something like a ghost chili pepper. Some may never enjoy it, but those that can, do so immensely!”

FULL OF HELL & MERZBOW IS OUT NOW VIA PROFOUND LORE/o:p