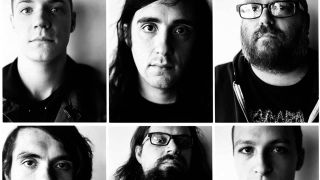 On Full Of Hell and The Body’s upcoming collaborative full-length, they’ve reimagined Leonard Cohen’s The Butcher.

Speaking to Metal Hammer about the cover version, Full Of Hell vocalist Dylan Walker says: “We chose to cover The Butcher because Lee (Buford, drummer for The Body) and I have been fans of Leonard Cohen’s work for as long as we can remember.

“I remember a day not long after we had decided that we would collaborate, I was driving home from work listening to Cohen and singing along with The Butcher. I saw a parallel in my mind between him and The Body. It was so obvious that I couldn’t believe I hadn’t heard it before. I truly believe that Cohen channels so much in that song that’s it the same essence that makes The Body great. The Butcher is epically tragic and morosely stark.”

He goes on to discuss the recording of the The Butcher for new album One Day You Will Ache Like I Ache.

“When we went into record, Chip (King, vocals and guitar for The Body) laid down a guitar track, which was pretty simple because the song is relatively simple, and as a distorted instrument it becomes even more so. We then decided as a group to flesh it out with some minimal percussion from Lee, and some noise from me. Chip and I decided to trade off verses and come together at the end for the final section.“

One Day You Will Ache Like I Ache is out March 25, via Neurot Recordings. The two bands head out across Europe in April, full tour dates here.