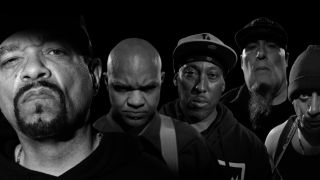 Body Count mainman Ice-T has explained the reasons why he chose the title Bloodlust for their new album.

The follow-up to 2014’s Manslaughter will be released on March 31, with the band issuing a video for their new track No Lives Matter earlier this week.

Asked why he chose the album name, Ice-T says it was a result of humans being the “most violent species on Earth.”

He tells Playboy: “Bloodlust is really just my overview of humans. We’re into aggression and violence. We’re our own virus.

“So whether I’m talking about the bloodlust of the serial killer in Here I Go Again or the bloodlust of The Ski Mask Way cats or the police or all these different realms of human behaviour –we’re fucked up.

“We’re the most violent species on Earth. So all the songs are different realms of our own fucked up-ness.”

The album contains a cover version of Slayer’s Raining Blood, which was unveiled last summer. And Ice-T reports it had to be on the album as it fit into the overall ‘bloodlust’ theme.

He continues: “We played it in a rehearsal, just fucking around, and we Periscoped it. People went batshit crazy for it, so we were like, ‘Should we put that on the album?’

“Then we did a show in Arizona where we just opened with that, and the crowd went crazy. So we knew we needed it in our repertoire.

“I did that little intro on the album where I mention Black Sabbath, Suicidal Tendencies and Slayer, because I think Body Count is a hybrid of those three groups. Then you add my gangster sensibility and lyrics that come more from the street.”