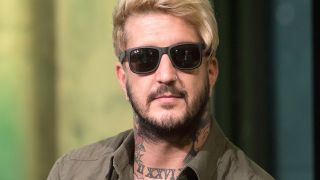 Austin Carlile has issued a statement saying that sexual assault allegations made against him are “false and defamatory.”

The claims surfaced on social media earlier this month, with his old band Of Mice & Men issuing a statement in light of the allegations, while their guitarist Alan Ashby said he had “never witnessed nor knowingly stood by during any instances of any alleged sexual assault.”

Now Carlile has released a statement saying that the allegations are “unfounded” and "extremely heinous and completely without merit."

Carlile’s full statement reads: “In my younger years, I absolutely was not the best person, but I have never physically abused, preyed upon, forced myself upon, or drugged any woman. These accusations are false and defamatory.

“I am not a perfect person: I smoked marijuana daily, drank often, got into fights and acted like a jerk more times than I can count. I did things and acted in ways that I am not proud of, but never have I violated anyone.

“These 'accusations' being thrown around on social media, in our current 'cancel culture' climate, are extremely heinous and completely without merit.

“My wife is a molestation and rape survivor, and I have personally seen the deep, long-standing pain that she battles with every day. I have spent years surrendering my flesh over to God, allowing Him to constantly improve who I am as a man, husband, and father.

“During this past week, I have even had the joy of seeing the heartbeat of my new child for the very first time. Today, I am focused on supporting my pregnant wife, our daughter, this new blessing in our lives, my health, my wife's health, and striving to be a better person every day.

“These accusations have been investigated by the appropriate authorities as well as independent journalists and were determined to be unfounded.

"I apologise to the Marfan Foundation, I Am Second, my former bandmates and any of our dedicated fans who have been unjustly brought into this controversy and wish them all nothing but the best.

“All women deserve to feel safe, supported, and heard, but these unjust attacks upon my family and accusations against me, are decades-old claims that are unfounded.”

Carlile stepped away from Of Mice & Men after his much publicised struggles with Marfan Syndrome at the end of December 2016.