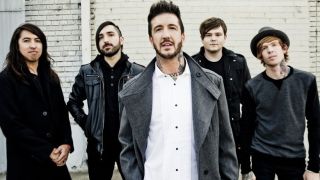 Of Mice & Men have issued a statement following online sexual assault allegations that have been made against their former singer Austin Carlile.

The allegations have been posted on social media about the vocalist, who left Of Mice & Men in December 2016 – and that prompted a response from his old bandmates Aaron Pauley, Alan Ashby, Tino Arteaga and Phil Manansala who said: “Yesterday, we heard for the first time of an alleged article that was written, and apparently subsequently shelved, regarding a former member of our band.

“This individual has not been a member of Of Mice & Men for almost four years and neither the band, nor the team around us, has had any part in suppressing any such article.

“We absolutely condemn sexual violence and harassment in any form.”

Guitarist Ashby later tweeted: “Absolutely disgusted and heartbroken. While I was indeed aware there was a level of promiscuity going on, I want to make it perfectly clear I have never witnessed nor knowingly stood by during any instances of any alleged sexual assault regarding a former bandmate.”

When Ashby was asked why he decided to speak now after the allegations had been around for "quite a few years," Ashby replied: “I am speaking out now because I'm extremely disgusted with myself for not realising this behaviour sooner.

“The info was out there and I didn't do the research. I had always taken his word on things and now I'm realising how naive I was to have done that.”

We've reached out to Carlile's team for further comment.

Carlile stepped away from Of Mice & Men after his much publicised struggles with Marfan Syndrome at the end of December 2016. A few months after his departure, he claimed that one of the reasons he quit was because the band “weren’t going to let me write what I wanted on next record.”