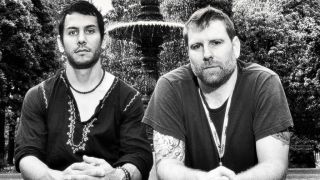 Reinert formed prog metal pioneers Cynic with guitarist Paul Masvidal back in 1987. The band always stood out from the then burgeoning death metal scene and released their groundbreaking debut Focus in 1993. They disbanded in 1994 but returned to activity with 2008's Traced In Air.

Reinert lefty the band in 2015 and announced they'd split due to artistic and personal differences but the same day Masvidal announced the band would continue. Reinert was replaced by Matt Lynch.

The drummer also appeared on Death's 1991 album Human, a seminal album in the development of the technical death metal genre. Reinert later worked with the US prog rock band Perfect Beings, although they announced they'd split up earlier this year.

Reinert's former band mate Paul Masvidal earlier posted a plain black image on his Twitter and Instagram page as well as the Cynic Facebook page. There has been no further comment from the band as yet.