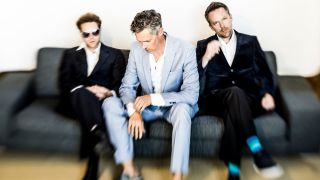 The US prog rock band Perfect Beings have announced that they've up. In a statement on their Facebook page the Los Angeles outfit, who released the acclaimed Veir album on InsideOut Music in 2018, announced the news, stating that artistic differences, the hardships of being an independent band and the impact of streaming services had all played a part in the decision.

The four band members are all working on different projects. Guitarist Johannes Luley is working on a jazz album, singer Ryan Hurtgen is working with ambient sound collective The Resonance Experience and keyboard player Jesse Nason has released an album under the band name Mono Sources.

The band rose to prominence in 2014 when they released their self-titled debut album. They followed that with the equally well-received Perfect Beings II in 2015, before signing with InsideOut for 2018's Veir.

In a statement, the band said:

End of a decade - end of an era. As some of you may have already put together, it is time to announce that Perfect Beings have disbanded. We thank you for your support throughout the past 6 years, as we could not have done any of this without you.

We did have a few artistic differences when we started to approach our next record. Our deal with InsideOut/Sony had run it’s course. So in the end we agreed that it would be better to go out on a high note, rather than forcing something that didn’t come naturally. Also, being a musician and supporting oneself as an independent artist has become increasingly harder since the rise of popular streaming platforms. This simple fact had also put a strain on us (and presumably many other artists), trying to make a living by creating and playing original music.

All that said, we will continue individually as artists in one form or another. Jesse just released an amazing album titled Mono Sources (monosources.com), Ryan has been involved with the Resonance Experience and has been creating immersive, meditative music (ryanhurtgen.com), Ben is engaged in various cool projects in and around LA (levindrums.com) and Johannes (johannesluley.com) is currently conceptualizing a jazz album.

So please stay in touch and keep checking in with us. We will always look forward to hear from you. If you are looking to buy some PB music, we still have all three albums in various formats, as well as T-shirts for PBII and Vier, available at https://perfectbeingsband.com/store/

Happy Holidays and onward to a great 2020,