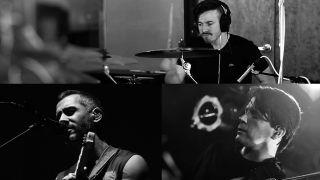 Cynic break their silence with an expanded version of Traced In Air, out on September 27 via Season Of Mist.

Says vocalist and guitarist Paul Masvidal, "Traced In Air has been brought up to date for 2019 – a remix where something less means a little more. Cynic has always been about forging paths rather than building walls."

Last year, Masvidal teased a new song Humanoid via the band's website. The track was mixed by Getgood, and included performances from Malone and new drummer Matt Lynch (Trioscapes). It was the first new material from Cynic since 2014's Kindly Bent To Free Us and their first since the sudden departure of drummer Sean Reinert in 2015.

Masvidal released his solo album Mythical earlier this year via Masvidalien Records. It's the first part of his Mythical Human Vessel trilogy.