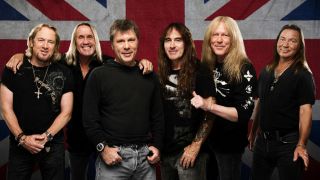 Iron Maiden have secured the no.8 spot on the Top 10 Highest Grossing Tours list for the first half of 2016.

Their extensive run of dates in support of their latest album The Book Of Souls has seen them make more than $35 million in sales – with almost 540,000 people attending their shows so far.

Former Pink Floyd man David Gilmour climbed to no.6, edging out the metal Brits by $7m on his Rattle That Lock tour. The Rolling Stones also powered to no.5 with their first South American stadium run in more than a decade. The group have raked in $488 million at the gate since their 50th anniversary shows in late 2012.

Bruce Springsteen and the E Street Band beat big acts such as Madonna, Beyonce and Coldplay to the top spot with his promotional tour for the deluxe reissue of his 1980 double album The River – grossing more than $135m and selling more than 1.1m tickets.

But singer-songwriter John Mayer and his band Dead & Company are expected to make the list by the end of the year. The Grateful Dead spin-off have sold out multiple stadiums and their on-the-door sales have reached as high as 3000 per show, according to Mayer’s agent, Scott Clayton, at Creative Artists Agency.

US packages including Weezer and Panic at the Disco, Breaking Benjamin and Disturbed, Korn and Rob Zombie, Heart, Joan Jett and Cheap Trick, and Sting and Peter Gabriel are also predicted to make waves with their rocketing sales over the coming months, according to industry sources.