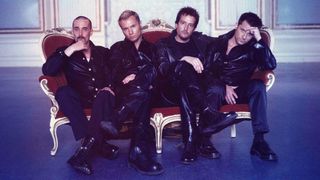 Filter have released a new lyric video for their classic single Take My Picture.

The single is taken from their 1999 album Title Of Record, and is being re-released with a new video to mark the album's 20th anniversary.

Title Of Record is also being reissued as a remastered expanded edition, and will be available on vinyl for the first time, as well as on CD and streaming platforms.

"It’s weird – it feels like yesterday, but strangely nostalgic," Filter's Richard Patrick tells Louder of the anniversary celebrations. "It’s definitely a good sensation. I recommend it."

On the Take My Picture video, Patrick says: "Honestly, [I picked this track] because it’s one of my favourite songs. I’m super proud of it.

"Even though I’ve publicly explained some of the meaning behind the lyrics, the song still holds a lot of secrets. I love the new lyric video. It came out great."

"I have grown into a 51-year-old father of two. I have been sober for 16 years. I used to be the kid and now I’m the adult. All things come around. I just hope everyone still enjoys the song as much as I do. It brings me great joy to sing it after all these years."

Title Of Record's expanded version is available via Craft Recordings now. The expanded edition features four new tracks: (Can’t You) Trip Like I Do, (originally recorded for the soundtrack Spawn The Album), Jurassitol (previously released on The Crow: Original Motion Picture Soundtrack), as well as remixes of the singles The Best Things (Humble Brothers Remix) and Take A Picture (H&H Remix).