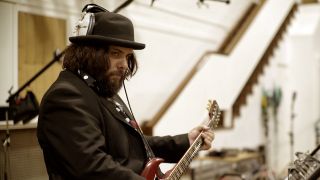 US prog rocker Fernando Perdomo has premiered a brand new video for the song Five Four with Prog. The video was created by film producer Cyndi Trissel using nothing by NASA footage to create the epic new space video.

"Five Four always sounded like a space flight to me," explains Perdomo. "It really was a wonderful experience recording the song with Mark Murdock sending files to Japan. Originally the title was in reference to the 5/4 time signature... But Cyndi Trissel who edited the video told me it can also be 5, 4, 3, 2, 1! All the footage in the video was taken from the free NASA archive online."

Five Four is taken from Perdomo's Out to Sea 2 album, released earlier this year. Both songs feature Mark Murdock on drums, formerly of Peter Banks' Empire. Fernando Perdomo is confirmed with his Out to Sea Band for the 2020 edition of Cruise To The Edge and On The Blue Cruise.