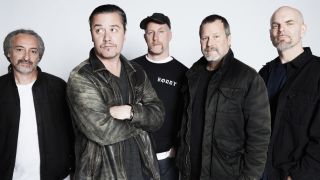 Faith No More have streamed their comeback album Sol Invictus ahead of its release next week.

Hear all 10 tracks, totalling just under 40 minutes of music, via NPR now. It’s available to UK readers via NME.

The band’s comeback title is launched 18 years after previous outing Album Of the Year and follows the band’s live reunion in 2009.

Keyboardist Roddy Bottum admitted in February that they’d been bored into a studio return, saying: “We felt like there are a whole lot of people out there who look to us to be inspired by what we do artistically.

“To be doing old songs over and over felt kind of cheap and easy – and a little too safe a place to be. That’s not who we are.”

Meanwhile, ex-frontman Chuck Mosley made a guest appearance at the band’s show in Detroit over the weekend.

Mosley – who was fired in 1988, making way for Mike Patton’s arrival – fronted his former colleagues for a rendition of their track Mark Bowen, from 1985 debut We Care A Lot.

Sol Invictus is released on May 18. FNM return to the UK next month to play three shows: