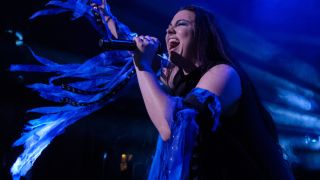 The band are on the road as they gear up for the December 9 release of vinyl box The Ultimate Collection and they’ve been playing brand new track Take Cover every night.

Vocalist Lee says the band were keen to give the fans a taste of something new and she says they are definitely thinking ahead to releasing new Evanescence material.

Lee tells TeamRock: “We are playing a new song live right now. We got together for rehearsals and we really focused this tour on the fans and the history of the band.

“Kind of in light of this whole box set theme, we wanted to do everything that the fans want and not just what we felt like doing. It has been so fulfilling and so fun.

“When we got together the guys were really strongly supportive of it, we had a song in the bank. And we were like, ‘You know what the fans would really love is a new song. That’s all they ever ask for.’

“So we knocked the dust off an old song called Take Cover that we had in the bank for a while and we loved it. It’s one of our favourite moments every night on the tour.

“I think they like it a lot. I posted the lyrics on Facebook and now I get at least five people in the front row mouthing along, which is extra fun.”

With dates lined up through until next week, the band are in fine form and are enjoying working together, Lee says.

“We’re definitely in a creative mindset,” she says. “We’re playing the best that this band has ever played.

“Everyone is healthy and happy and loves being here and likes working together. It sounds like maybe that shouldn’t be so rare, but it really is.

“So we’re looking for opportunities to work together more and we want to get creative. We’re definitely in that new chapter moment where the wheels are turning.”

How Evanescence Came Back From The Brink