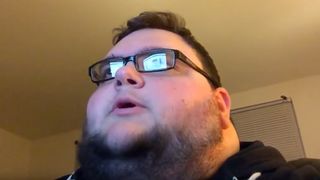 There’s a video circulating the internet of a man, in his room, singing. So far so boring, you might be thinking, YouTube is full of bedroom wannabes with their vocal covers, vlogs and general time-wasting. But this is different. This is the single greatest cover on the internet.

This man is Jon Sudano, and he’s just like you. Like us. Like everyone. He spends his time, sitting at a computer and listening to music, wishing life could be something more. Life could be different. Life could be about being an allstar.

In a way, Jon is indeed all of us. While we sit and post on our Facebook and Twitter about the latest cool, underground bands we’ve discovered on Bandcamp, we still revert back to the music we loved in our youth, and for 20-somethings across the world, that music comes in form of Smash Mouth. Jon, like you, like everyone, has a 200-strong noughties playlist on Spotify, filled to the brim with guilty pleasures and songs you’d never admit to genuinely enjoying.

But Jon is different, Jon is a hero.

He knows every single word to All Star – a song that featured in Shrek, Rat Race and Digimon: The Movie – and isn’t afraid to show it. He doesn’t have to get drunk in a rock club, he just needs his iTunes. He is at peace with his music taste. He is a bastion of early noughties pop culture. He is the Borg of ‘90s nostalgia, absorbing all that Tumblr has to offer. He is the Alpha Millennial.

You know Jon’s 2000s playlist is better than yours. You know Jon couldn’t give two fucks what you think about his vocal skills. And you know that Jon loves Smash Mouth more than you do. He loves Smash Mouth more than you have ever loved anything. Jon’s passion for Steve Harwell is stronger than any emotion you can ever hope to achieve. His Smash Mouth love is pure, it is powerful, it is life. His love ignores the haters, ignores the trolls, ignores the elitists, and extends through to his unequivocal affection for Evanescence, as demonstrated here.

We salute you, Jon. You’re an all star, get your game on, go play.

How Evanescence Came Back From The Brink