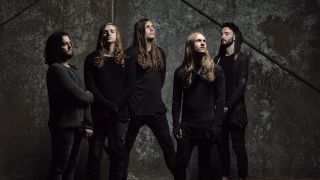 Australian prog metallers Ebonivory have released a trailer for their forthcoming new album. The band have announced they will release The Long Dream 1, the first of a two-part concept album, on June 5 through Wild Thing Records. You can watch the trailer in full below.

"We are absolutely beaming with excitement knowing that the first instalment of our upcoming 2-part album, The Long Dream will finally see the light of day on the 5th of June," singer Charlie Powlett tells Prog. "Entirely self-produced (the album has been mixed by Aussie prog-metal wizard Forrester Savell) over the course of four years, The Long Dream became infused with self-referential hardship and internal disaster that only further serves its story.

"Every song presents a completely unique reimagining of what progressive music is capable of, while maintaining cohesive melodic bonds like a sequence of dreams that makes perfect sense, but only until you commit it to words. It is a twisting journey that weaves through depression and elation; past, present, and future. This album is the cornerstone of Ebonivory. It encompasses everything we are passionate about as a band, and represents our leap of faith into the raging storm that is the modern music industry."

Sadly the band's proposed support slot with fellow Australian proggers Caligula's Horse has now been postponed until 2021 due tot he COVID-19 crisis.

"Every sector of our industry is fundamentally affected, but in a time where new music is becoming crucial for morale, we’ve decided to push on with releasing this album, despite the immediate inability to perform in-person shows to support it," the band add. "We’d like to sincerely thank everyone that has supported Ebonivory thus far, and want our fans to know that we are monitoring the situation very carefully in order to organise shows at the soonest dates, without putting anyone at risk. We are still extremely excited to have the opportunity to share our music with the world!"