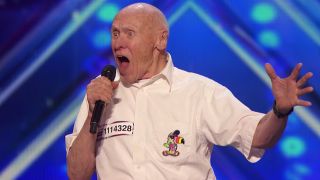 Hetlinger, from Colorado, made headlines when he got through to the second round of the US TV talent show by performing Drowning Pool’s hit Bodies – leading three of the four judges to vote yes.

His performance went viral and was noticed by the band who received a barrage of texts from friends about Hetlinger’s success. And guitarist CJ Pierce says he’d love to share the stage with the pensioner.

Pierce tells Loudwire: “It’s awesome to just see an 82-year-old man get out there and just belt out some metal – whether it was our song or any song, it was just killer to see him do that.”

Drowning Pool are lined up to play at the Chicago Open Air festival in July and hope to team up with Hetlinger for an encore performance of Bodies.

“I just mentioned Chicago Open Air because it’s the next big festival coming up that we’re playing and if we’re going to do it, I’d rather do it right and have him on a big show like that. So I’m hoping he does.

Drowning Pool have a number of tour dates still to come this year.