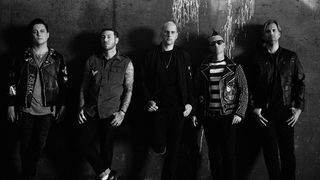 Avenged Sevenfold have been named as the second headline act for next year’s Download festival in the UK.

Earlier this week, it was announced that Ozzy Osbourne would headline the final day of the event on Sunday, June 10, at Donington Park – now he’ll be joined by A7X, who will take to the stage on Friday, June 8.

The band say: “We are more than honoured to be a part of this legendary show and line up. Being asked to headline Download for the second time is a career highlight. We would like to thank our UK A7X family.”

Download promoter Andy Copping adds: “A real career highlight of mine was giving Avenged Sevenfold their first ever UK festival headline slot, and I’m thrilled to welcome them back.

“You don’t often see bands like Avenged Sevenfold top the charts, but much like seeing them live, they’re not to be underestimated.”

Tickets for Download 2018 are available from the official festival site, while other artists will be revealed in due course.

Last week, Avenged Sevenfold revealed they would release a deluxe edition of their latest album The Stage on December 15.

Also included is their new track Dose along with four live songs recorded at their recent show at The O2 Arena in London: The Stage, Paradigm, Sunny Disposition and God Damn.

The Stage Deluxe Edition will launch on 2CD, vinyl and on digital services and is now available for pre-order.