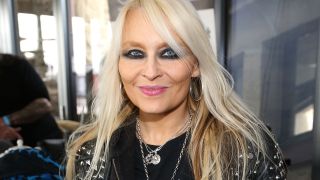 The world of live music has largely been on hold due to the coronavirus pandemic, so the former Warlock vocalist has lined up a concert at the CARantena-Arena in Worms, and one at at Bottrop’s Autokino am Moviepark – with both venues more used to hosting movie-goers than music fans.

The Queen Of Heavy Metal says: “Dear fans, we don’t have many choices to perform live at the moment, so why not make the best of it and play at a drive-in cinema? We like the idea a lot.”

The concert in Worms will take place on June 13 – part of the Regenbogen 2 Rock Summer festival – while the Bottrop show will get under way on June 28.

Doro – who revealed earlier this month that she would soon be releasing a new single titled Brickwall – has also uploaded an outdoor video showing her onstage, accompanied by a guitarist and a drone.

Last month, we reported that Denmark and Lithuania were hosting drive-in concerts, while Live Nation are also considering something similar in light of the pandemic.

And in Arkansas last week, Bishop Gunn frontman Travis McCready played the world’s first socially distanced concert in front on 229 people – around 20% of the venue’s capacity.