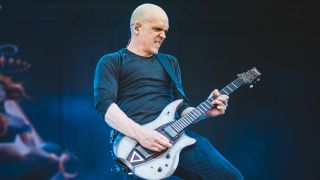 The Canadian musician previously reported he was ready to move on from his alien creation after his 2014 Z2 album. But it looks as if he’s resurrecting Ziltoid for a new game.

Townsend posted a couple of images on social media showing Ziltoid with an alien army and says: “Developing a Ziltoid phone app in tandem with new music. Creatively free and fun. Meeting tonight to get ideas flowing.”

Earlier this month, it was revealed that The Devin Townsend Project were on hiatus so Townsend could concentrate on other projects.

He said: “Life is short and I have a lot I need to say in some new and different avenues. I will certainly continue to play live in several new ways – starting next year – and I’m excited about some collaborative things that have also come up as well.”

Townsend released seven albums under the Devin Townsend Project banner, their last being Transcendence in 2016.