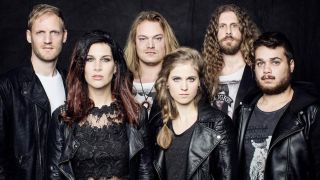 Delain have made their track Suckerpunch available to stream.

The EP features two new tracks – including Suckerpunch – as well as four live cuts, an alternative take on Don’t Look Back and an orchestral version of Suckerpunch.

Delain say: “Today, we release the first track off Lunar Prelude – an upbeat fight song about facing your demons and taking them on. Don’t let them weigh you down. We hope you will enjoy Suckerpunch.”