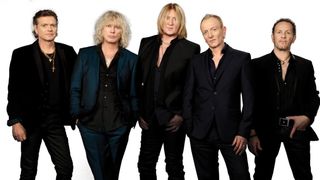 Def Leppard are to launch their And There Will Be A Next Time – Live From Detroit DVD on February 10.

The release, which will be made available on DVD and 2CD, Blu-Ray and digital video, will showcase their performance at Clarkston’s DTE Energy Music Theatre in Detroit while on their North American tour this summer.

Frontman Joe Elliott says: “I had this idea that we should film one of the shows from the 2016 tour because apart from the Viva Hysteria shows, we hadn’t actually had a live performance filmed since 1988. With a new album out that was being so well received, it was just a case of where to do it.

“From the second the house lights went down, we could see the sun setting from the stage, and the energy from the crowd just seemed to intensify. It was a good choice and a great way to document Def Leppard in 2016.”

The release can be pre-ordered via the Pledge website.

Def Leppard’s self-titled album was last week named Album Of The Year at the Classic Rock Roll Of Honour in Tokyo.

And There Will Be A Next Time - Live From Detroit tracklist

Every Def Leppard album ranked from worst to best