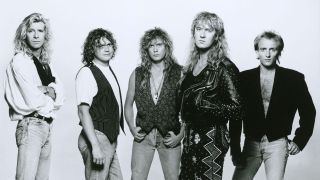 With the release of Volume One – the first in a series of career-spanning box sets –little more than a month away, Def Leppard have released a previously unseen lyric video for their 1988 hit Pour Some Sugar On Me. Originally released on the previous year's Hysteria album, it was the song that sent the album from a mere three million sales to the chart-topping, record-shattering, diamond disc behemoth we're familiar with today.

“The song became a hit because strippers in Florida started requesting it on the local radio station,” Phil Collen told us in 2016. “It had a second lease of life. Hysteria was all over bar the shouting, and then all of a sudden this song just got popular, and then the album went to Number One. It’s really funny how it suddenly became cool because it was a stripping song."

For Volume One, Hysteria has been been re-packaged as a double LP for the vinyl version of the box set, which also includes the band's On Through The Night debut, 1981’s High ’N’ Dry, and 1983’s breakthrough collection Pyromania. The set will also feature Live At The LA Forum 1983, which was originally released as a bonus disc on the deluxe CD version of Pyromania.

A disc titled Rarities Volume 1 compiled by frontman Joe Elliott is also included, which has features b-sides and recordings from the band’s early years. Also contained is a 7-inch vinyl single and 3-inch CD of Leppard’s self-titled EP from 1979. The full track listing is below.

"Hope you enjoy listening to it as much as we did making it," says Joe Elliott. "It’s basically the 80s all banged into one box."

Volume One is available to order now.

Def Leppard will head out on the road across North America with Journey from May before returning to the UK and Ireland in December for a run of Hysteria tour dates.

Find a full list of dates and how to get tickets on our Def Leppard tour page.