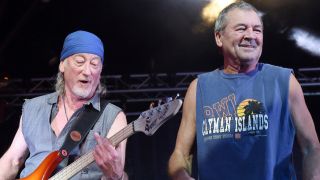 Deep Purple have announced they’ll play a one-off gig in London next year.

The show will take place at the O2 Arena on December 3, 2015 and tickets go on sale on this Friday (October 31). O2 priority tickets are available now.

The group have confirmed they’ll release a new album in 2015. They’ve been in a recording studio in Portugal writing material for the record, which will be a follow-up to 2013’s Now What?!

Earlier this month, the band issued a clip of Uncommon Man from the Celebrating Jon Lord: At the Royal Albert Hall DVD, CD and Blu-ray package, while bassist Roger Glover recently said if they were voted into The Rock And Roll Hall Of Fame, he might tell them to “forget it” as they’re 20 years too late.