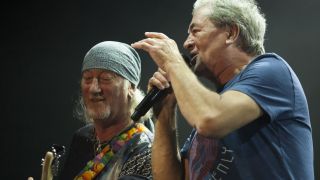 Deep Purple have confirmed they will release a new album in 2015.

Frontman Ian Gillan previously revealed the band were holed up in a studio in Portugal. And bass player Roger Glover has announced the follow up to 2013’s Now What will arrive next year.

Glover says the writing session in Portugal produced a number of ideas for new songs.

Ahead of their performance at Hellfest in France, Glover tells Rock Meeting: “What happened with Now What is we had a writing session in Spain for about a week or so, and then we had another writing session, and then we recorded the album. And it was eight years between albums. We can’t live that long to do another eight years.

“We had a writing session a couple of weeks ago in Portugal, and we’ve got about a dozen rough ideas and jams, some of which will make it. We’ll have another writing session later in the year and I think, probably, I don’t know when next year, but sometime next year, there’ll be another album.”