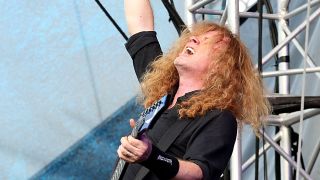 Dave Mustaine says he is wary of over-eager fans who try to interact with him on social media.

The Megadeth frontman says he enjoys speaking to fans on Twitter, but he is conscious that some people get the wrong idea.

Mustaine tells Linea Rocks: “I do a little bit, I like to talk with our fans.

“But there’s a weirdness with social media where there are certain people out there, that if you talk to them once, they think you are their best friend.

“And if you don’t answer them back…it’s just like the Eminem song Stan. Do not apply, Stan.”

He adds: “Best performance he’s done? I think it would probably have to be something off the Rust In Peace record, because after that record, he kind of went slower and slower. I think that that probably was his best record.”

Megadeth’s latest album Dystopia was released in January and the band are currently on tour. They perform at Download festival on June 11. Soilwork’s Dirk Verbeuren is on drums for the band as Chris Adler has returned to work with Lamb Of God.