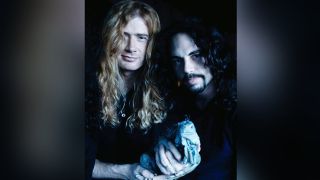 Mustaine says: “Originally a tech for the band, Nick displayed such talent and personality, it didn’t take long for us to realise he belonged on stage with us.

“We asked Nick to join Megadeth in 1989. Our first album with Nick, Rust In Peace, and subsequent albums Countdown To Extinction and Youthanasia, kept up the momentum.

“We parted ways after Cryptic Writings – we, like all brothers, would disagree at times, but our bond was strong throughout.”

Menza came close to rejoining the band on several occasions, but Mustaine says: “For various reasons it never came together. We’ve been in touch all along, he had come to our shows recently, and he had remained a great friend, a true professional and a larger-than-life personality.”

He adds: “As great a drummer as he was, the time spent with him as a person, a bandmate and a friend was even more fun.”

The band will be involved in an upcoming scheme to provide help and support for Menza’s family.

Meanwhile, former Megadeth guitarist Chris Poland, also a member of Ohm, has also paid tribute to Menza. He says: “I honestly think God ran out of ideas and had to have Nick help him out.

“When I was recently in hospital, he was on the phone with my wife the whole time, asking, ‘Can I get you guys anything? Do you want me to go shopping?’ Who does that? There’s not enough words to describe.”