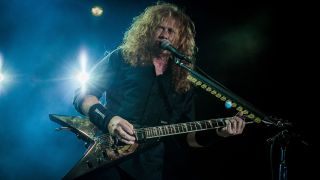 Megadeth leader Dave Mustaine has once again talked about the possibility of Big Four shows ahead of Slayer calling it a day.

The vocalist and guitarist said last week that he would like Megadeth, Slayer, Anthrax and Metallica to play together again following the news that Slayer were about to embark on their final tour.

And when asked if there’s been any dialogue about the bands hooking up again since his comments, Mustaine tells SiriusXM’s Eddie Trunk: “I think if you asked the three of us that, our camps would probably say yes.

“If Anthrax, Slayer and Megadeth all want to do it and Metallica doesn’t, then what do we do? The Big Three?

“I’m sure that a lot of people would like to see that, and that’s maybe what it is. It may end up having it be the Big Three plus no.5 if we have Exodus play.”

Mustaine adds: “But it’s not about just doing concerts for the sake of concerts. It was about the movement – it was about what we did together as a group.

“Excluding Anthrax, we’re all neighbours because we all lived so close. It was just a half hour to an hour at the most between each other’s houses.

Watch the video interview below.