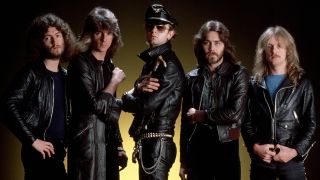 Former Judas Priest guitarist KK Downing is to release a book titled Heavy Duty: Days And Nights In Judas Priest which will document the history of the band through his eyes.

It’ll be published on September 18 via Da Capo Press and will “delve backstage into the decades of shocking, hilarious, and haunting stories that surround the heavy metal institution” that is Judas Priest.

The synopsis on the book continues: “In Heavy Duty, guitarist KK Downing discusses the complex personality conflicts, the business screw-ups, the acrimonious relationship with fellow heavy metal band Iron Maiden, as well as how Judas Priest found itself at the epicentre of a storm of parental outrage that targeted heavy metal in the 80s.

“He also describes his role in cementing the band’s trademark black leather and studs image that would not only become synonymous with the entire genre, but would also give singer Rob Halford a viable outlet by which to express his sexuality.

“Lastly, he recounts the life-changing moment when he looked at his bandmates on stage during a 2010 concert and thought, ‘This is the last show.’ Whatever the topic, whoever’s involved, KK doesn’t hold back.”

The synopsis continues: “Downing has seen it all and is now finally at a place in his life where he can also let it all go. Even if you’re a lifelong fan, if you think you know the full story of Judas Priest, well, you’ve got another thing coming.”

Dark Days is now available for pre-order via Amazon in the US and in the UK.