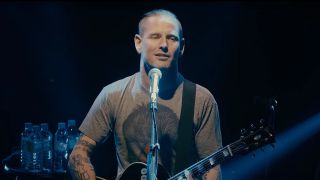 Corey Taylor has released a short video teaser for his upcoming acoustic set Live In London.

The Slipknot and Stone Sour frontman will launch the video for free through his website on December 18.

It was recorded at the city’s KOKO in 2016 and features material from Slipknot, Stone Sour, along with covers of artists including Johnny Cash, Kiss, R.E.M., The Cure and Creedence Clearwater Revival.

Taylor is currently on tour across Europe with Stone Sour in support of their latest album Hydrograd, which came out earlier this year.

Last week, the band announced they would return to the UK in June next year for three shows.