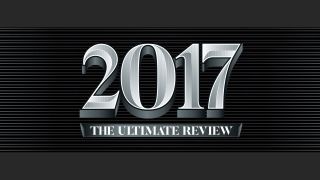 The Year In Rock: We’ve got the 50 best albums, the best tracks and interviews with some of the artists who made them. We look at the best records the rock world gave us, and the people we lost from it, over the past 12 months, including…

Albums Of The Year

Whether from legends, established stars or new rockers on the block, the past 12 months have seen the release of some outstanding albums across all genres. Including…

Von Hertzen Brothers
Working on their latest album prevented them from quitting.

Anathema
Hard work, preparation and how attention to detail paid off.

Tony Iommi
Never give up. Ghosts exist. The 90s weren’t fun. … The Black Sabbath guitarist on what his eventful life has taught him.

Marillion
Steve Hogarth looks back over a busy and successful 2017 and forward to exploring new horizons and visiting familiar ground.

2017 Playlist
No time to listen to the 50 best albums? Then try the less labour-intensive best 50 tracks of the year.

Cats In Space
Looking to bring some much-needed fun back into rock’n’roll.

Queen
Doctor Brian May on his “just out of this world” year.

Guns N’ Roses
It was the year the reunited GN’R finally got back in the ring with British fans. Knockout?

Joe Elliott
The Leppard frontman on how his adventure continues.

Those who left us
Gone, but never to be forgotten.

Walter Trout
What did the bluesman buy when we took him vinyl shopping?

The Professionals
Former Pistol Paul Cook’s latest line-up are back, giving it another go and “having a bit of fun”.

The Best Of The Year
Deep Purple, Alice Cooper, Thunder, the return of Black Country Communion, glossy AOR from H.e.a.t and some brand new blood. Here’s 15 of 2017’s finest tracks.

Raw Power
Looking for the ultimate aural experience? Then the £8,999 oBravo earphones might be just what your lugholes need.

The Stories Behind The Songs: The Byrds
So You Want To Be A Rock’n’Roll Star is a 60s classic. And if you saw the band live in ’65 you might even be on it!

Q&A: Bill Bailey
The rock’n’roll comedian talks punk, hens, having a good work ethic and playing Light My Fire at a cremation.

Heavy Load: Beth Hart
The singer talks about her troubled childhood, insecurity, singing with Jeff Beck, death and the “miracle” of life.