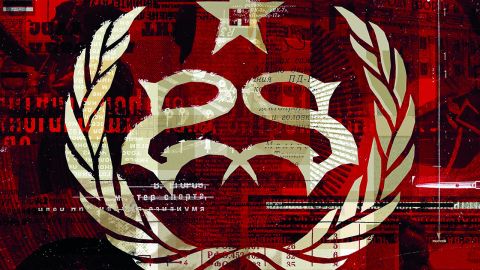 It’s been four years since Stone Sour made what might yet be the band’s defining statement: the sprawling, visceral and cerebral dreamscape better known as the House Of Gold & Bones Part 1 and 2. A lot’s happened since then; guitarist Jim Root went on hiatus and was never invited back, which led to a lot of public acrimony, with Jim accusing the band of abandoning their intrinsic musical mores in favour of “radio play and money”. If nothing else, it must have made the subsequent Slipknot band meetings a knotty proposition.

Hydrograd began in two places: at an airport in the old Eastern Bloc, with Corey running to reach a flight and find his gate, only to pull up when he saw a sign flicker into life for a destination he misread as ‘Hydrograd’, and in a garage in Burbank. The latter is where the band relocated for the stopgap covers EPs, Meanwhile In Burbank… and Straight Outta Burbank …– both charming and scratchy and a direct nod to where the band had originated from musically.

The garage was also the place where they began demoing up songs for the album that would become Hydrograd – it might be the lineage of the music they were making for the EPs that explains the switch from the grandiosity and ambition of the House Of Gold & Bones albums to the drier and more direct punch of the band’s latest record. Less fantastical and more gritty, it performs – and doesn’t always pull off – a high-wire act between songs like the plaintive country twang (much better than it sounds) of the haunting St. Marie and the creatively bone-dry Fabuless, which, with its musical nods to both Slipknot and the Rolling Stones, is so lacking in cohesion that it sounds almost schizophrenic. Confusingly, that’s how the album as a whole rolls. The House… albums flew daringly and experimentally high. Consider the rueful Taciturn, the graceful Tired or the surprising staring-into-the-abyss tone that informed the entire album – a story of the Human cast adrift in a quest for the Red City, the Conflagration and, ultimately, redemption – that made Part 2 so bleakly beautiful. Then consider the low-hanging fruit that is the clunking Knievel Has Landed or the rudderless-sounding The Witness Trees, both better titles than they are songs. It sounds like the work of a less ambitious or nuanced band.

So that’s how they end up; sometimes they chart the artistic higher ground with tunes like Song #3, which manages to combine an earnest, heartfelt lyric and melody (and some very cool AOR-like notes) and could quite easily sit comfortably on any rock radio station. It’s a welcome reminder of what made Stone Sour sound so refreshing originally. But conversely, they might have taken a song like Mercy and called it ‘Dirge’ and saved us all the trouble of listening. And that’s how the entire record runs; there’s a very good album in Hydrograd, struggling to get out among the musical morass of songs that should have never made it to the mix stage. It’s like watching a car go off the road and wondering why that is until you realise that no one can decide which way they should be driving.