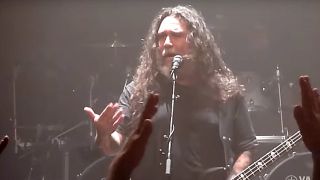 Slayer frontman Tom Araya has been captured on video reacting angrily to an audience member who spat on him.

His band were preparing to perform at the Comic-Con in San Diego last week when the incident occurred.

In the clip, Araya – who’s spent the previous moments laughing and joking with the crowd – is seen thanking them for their attendance.

He continues to remonstrate with the person while the crowd begin to boo on the frontman’s behalf, then start chanting: “Kick him out!”

Araya keeps asking for an explanation until a roadie calls on house staff to remove the fan. While that’s happening, Araya tells the rest of the audience: “I don’t understand that.” The show then begins as planned.

Slayer are currently touring in support of latest album Repentless, released last year. Their schedule includes an appearance at Bloodstock Open Air in Derbyshire on August 14. Last week they confirmed plans to release a comic book based on the record.