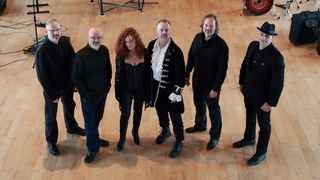 Circuline have been confirmed as the support for IO Earth’s upcoming live shows in the UK.

The three gigs will be a landmark event for the band as it’ll be the first time Circuline have played outside of the US – and vocalist and keyboardist Andrew Colyer is looking forward to the experience.

He tells Prog: “Circuline is very excited to be playing outside the US for the first time and we’re honoured to be doing these shows with IO Earth – an outstanding modern progressive rock group.

“Considering that they are the only band other than Yes to have performed on every single Cruise To The Edge, you know they have to be great.

Colyer adds: “England has Circuline’s second most amount of record sales and we’re doing shows in several locations around the country, so we hope to see a lot of friends and fans at the shows!”

Circuline released their second album Counterpoint last summer. Find a list of the tour dates below.