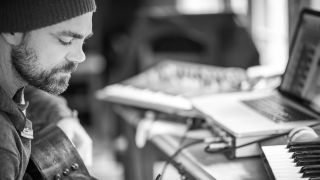 Casey McPherson, vocalist for prog supergroups Flying Colors and The Sea Within, as well as his own outfit Alpha Rev, has released a video for his song You Are The Peacemakes, which you can watch below.

The song’s lyrics taken from the blog of child activist Hallie Geier, who passed away at the age of 11 in 2004.  Hallie left behind more than 1,000 essays, poems, and stories, which became the inspiration for the You Are The Peacemakers. The song, originally written for the United Nation’s National Peace Day, has now been chosen as the official song of the Mindful Kids Peace Summit.

"Hallie’s story, and everyone at the Love, Hallie Foundation is so inspirational to me, it just goes to show that age doesn’t matter when it comes to making the world a better place," McPherson told Prog. "I’m also very honoured to have this song chosen for the Mindful Kids Peace Summit. What Adam is doing is groundbreaking!”

The song is taken from a new Alpha Rev album entitled Alpha Rev Presents Cas.e Sessions Vol. 1. This is a collection of songs written over the course of the last two years as part of the singer’s monthly fan-subscription service, The Cas.e Sessions.

As well as performing live with The Sea Within, McPherson is currently working with Flying Colors on the group's third studio album. He is planning an upcoming solo progressive rock album and will continue to release albums under Alpha Rev and as a solo artist.

You can find out more about the Mindful Kids Peace Summit here.