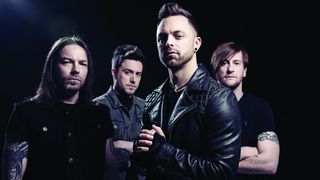 Bullet For My Valentine will release a brand new single titled Don’t Need You on November 7.

The Welsh outfit revealed they filmed the video for the song in a “run-down” church – with director Ville Juurikkala at the helm, who’s worked with Nightwish, Amorphis, HIM and Apocalyptica among others in the past.

Speaking about the track Frontman Matt Tuck tells Kerrang (via Blabbermouth): “It’s not really a ‘doomed’ wedding as such. It’s really just a take on a concept I had.

“There’s this beautiful ceremony, and it appears to be all about love and trust, but there’s this undercurrent of mistrust and bullshit to go with it. The church we filmed it in is perfect.

“It’s not your typical wedding venue – it’s really run-down and dirty. We thought that contrast would be really cool to have with the idea of the video. We wanted it to look really grand and ornate, but underneath it all, it’s a bit dirty.”

Ahead of the launch of Don’t Need You, the band have issued a quick teaser video showing the interior of the church. Watch it below.

Bullet For My Valentine are currently on the road across Europe in support of their fifth studio album Venom. They’ll commence their UK tour later this month – with six of those shows focusing on 2005 record The Poison.

Bullet For My Valentine UK tour

In The Studio: Bullet For My Valentine