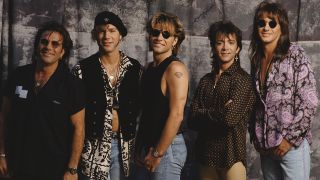 Bon Jovi with Such and Sambora in 1990 (Image credit: Getty)

The band have been eligible for the Rock Hall for almost a decade and finally got the nod yesterday, along with The Moody Blues, The Cars, Dire Straits, Nina Simone and Sister Rosetta Tharpe.

The ceremony will take place on Saturday, April 14, 2018, at the Public Auditorium in Cleveland, Ohio – with the band’s classic lineup of Bon Jovi, Richie Sambora, David Bryan, Alec John Such and Tico Torres named as the members who will be inducted.

And the vocalist says he wants everyone to share the moment onstage, including bassist Such who left in 1994, and guitarist Sambora who departed in 2013.

Bon Jovi tells USA Today: “I haven’t had the opportunity to hear from either of them but without a doubt, they both will be invited and asked to not only come and share it, but to perform.”

Sambora previously reported that he’d be open to playing with the band again should they be inducted – and he tells Trunk Nation: “Of course I’ll play. It’s so good to be recognised. It’s a thrill.”

Bon Jovi says he’s “humbled” to be one of the class of 2018 after such a long wait, and tells USA Today: “I feel like everybody who was nominated should get in.

“I feel like making music is not easy and making records for 25 plus years is definitely not easy, so it’s hard to say that someone is in and someone’s out.

“The continued support of the public vote was something they put into effect after we didn’t get in the first time. We didn’t have the benefit of that last time we were nominated. To receive such overwhelming support from the fan base, we’re grateful for it.

“But then the 900 plus people who actually vote confirmed what the people said for so long and I’m humbled by it, we all are.”

The ceremony will premiere on TV network HBO and will be broadcast via SiriusXM, with further details to be announced in due course.