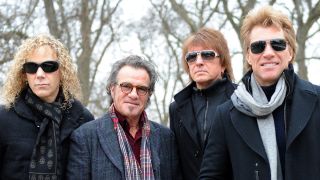 Jon Bon Jovi says the only contact he’s had in three years with Richie Sambora has been via social media.

The guitarist left the band at short notice in 2013, although the frontman has since said there’s no bad feeling between them.

But the episode kicked off a period of Bon Jovi’s life that he says has been so dark that he can’t begin to describe it.

He tells the Mirror: “Everything was great and we were just coming off a break – but he never came back to work. It was a shock.

“He has since reached out on social media, which was very kind. But we never saw him again. Nobody.”

The band continued with Phil X in Sambora’s place, but Bon Jovi began to encounter business and personal problems, including severe disagreements with his record label.

The singer says: “I’m not ready to share it in full – but it was not pretty. A lot of things added up and a snowflake became an avalanche. Those three years were tumultuous. This is the first day of the light at the end of the tunnel.”

And he credits his wife Dorothea with keeping him going during the hard times. “She is very wise,” he says. “She have me four great kids and I didn’t fuck up. I did it right the first time.”

The band will release latest album This House Is Not For Sale on November 4. Sambora recently congratulated his former colleagues on the release of the title track.

Bon Jovi: This House Is Not For Sale tracklist