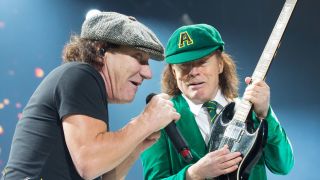 Brian Johnson is doomed. Not in physical terms or financial terms, obviously, but his career with AC/DC has clearly ground to a pretty jarring and unceremonious halt, and with the shockingly successful inclusion of Bill Bailey at the helm for the remainder of the last tour, I really don’t see Angus Young looking to reunite with his be-capped ol’ chum anytime soon.

Lest we forget, back in March, long-time AC/DC howler Johnson announced that he was facing “total hearing loss” if he didn’t take a break from touring. Johnson claims the hearing loss he’s suffered is the result of his second career as a race-car driver, not rock’n’roll, but facts are facts. The dude needed time off. Johnson stated that he wanted to work things out with the band, perhaps take a short respite and then finish the tour, but the band had other ideas.

AC/DC’s official statement about the affair, rushed out before the ink was even dry on Johnson’s announcement, was not the warmest send-off ever. Johnson was over and out in three measly sentences before the Axl-gushing began. Granted, they had obligations to fulfill and if you squint a little, the whole thing seems kinda heroic on Angus and Axl’s end, but at the time, Johnson stated he was blindsided by the whole affair, and essentially felt like he was being fired from the band, dumped by the side of the road and left for dead while his band of forty fucking years went on pillaging villages without him. And they did. I mean, that’s just what happened.

Sure, you do sorta paint yourself into a corner when you name your tour something as chest-thumping as “Rock or Bust”. But here’s the thing, Angus - there’s always bust. It’s an option. It’s right there in the title. If you wanted, you coulda put the rest of the gigs on ice and showed a little loyalty. I’m pretty sure everybody woulda been ok with that.

But whatever. Done is done The tour is over. So what next? At the moment, an in-ear monitoring company called Asius are touting a technological answer to BJ’s problems, stating that they could probably get him back on stage with no threat of further hearing loss within six or so months. But first they have to actually miniaturise their gizmos, and currently have an Indiegogo campaign going to pay for it. And while Johnson seems into it, “it” doesn’t even exist yet.

So it’s still up in the air on whether he’ll even be able to tour again, and another question completely about whether he’d want to tour again. And if he did want to tour again, would it be with the guy who sent his luggage home while he was sitting in the doctor’s office, wondering if he was ever going to hear the tea kettle whistle again? Honestly, I think I’d rather get Geordie back together, if I was him. But let’s say he’s up for it next year. What’s in it for Angus? AC/DC’s last-man-standing shows no signs of slowing down, and the prevailing wisdom is that he’d like to see the band going another ten years. And that’s just not gonna happen with a deaf guy.

Of course, it’s not going to happen with Axl Rose either, seeing as three-fifths of the original GN’R are back together and gobbling up $7 million dollars a show, so he’d have to come up with some more stunt-casting, But there’s plenty of down-trending former rock stars that could use the bread. Now that Josh Todd is off the sauce, he’s probably got another couple decades in him, easy. Angus wants to drink new blood, man. You’d feel that way too, if you were outliving everyone around you.

So I don’t see a bright future for Brian when it comes to getting his old job back. But there’s always race cars. And there’s also another alternative. If Axl traipses off with AC/DC again next summer, maybe Brian can just go join Guns N’ Roses for awhile. Imagine Johnson shrieking his way through Welcome to the Jungle? That’d be something, man. Also, the rest of Dio is gonna need a back-up if the electricity goes out on their Ronnie hologram. I mean, that’s the kinda madness Angus opened the door on when he invited Axl to finish the tour. Anybody can sing for anybody now.

I honestly thought it was only Baby Boomers with fat wallets who went in for this endless repackaging of the old and familiar, but it’s clearly spreading to my formerly hip generation of dead-eyed Gen X-ers. Evidently we’re all suckers who will buy a ticket for anything as long as we already know all the words, so do your worst, music industry. Let Brian sing for the fucking Doors if he wants.

But let’s face it, man. AC/DC really broke up around 1981. We’ve been whiffing fumes ever since.