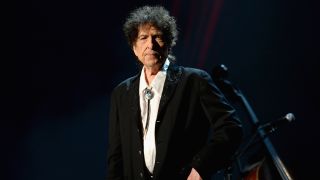 Bob Dylan has become the first songwriter to win the 2016 Nobel Prize for Literature.

The 75-year-old musician was named the recipient of the award by the Swedish Academy today “for having created new poetic expressions within the great American song tradition.”

He is the first American to win the prize since novelist Toni Morrison in 1993.

Sara Danius of the Swedish Academy says: “For 54 years now he’s been at it reinventing himself, constantly creating a new identity. He is a great poet in the English speaking tradition.”

Dylan has long been discussed as a potential winner of the prize, with former Poet Laureate Sir Andrew Motion previously telling the BBC his songs work as poems and often have “extremely skilful rhyming aspects to them. They’re often the best words in the best order.”

Dylan is currently on the road as part of his Never Ending Tour following the release of his collection of American songbook classics titled Fallen Angels.

He played at last weekend’s Desert Trip ‘mega festival’ in California alongside the Rolling Stones, Paul McCartney, Neil Young, The Who and Roger Waters. The event runs again this weekend.

Dylan will then head to Phoenix’s Comercia Theatre to kick off the autumn tour on October 16. The shows will wrap up on November 23 at the Broward Center For The Performing Arts in Fort Lauderdale.