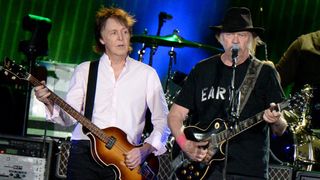 If the egos could be managed and logistics aligned, the one thing uber-festival Desert Trip was almost certain to supply was onstage pairings of the kind you won’t get at either the Dog & Duck or Download.

This weekend Paul McCartney got the ball rolling, with Neil Young stepping out halfway through McCartney’s set for a casual blast through a trio of Beatles classics.

Young, who’d already performed his own Promise Of The Real set, joined McCartney onstage to play A Day in the Life — which segued into Give Peace A Chance — and Why Don’t We Do It in the Road?, a song McCartney had never played live before, but one that Young made his own with a blistering, climactic solo.

The weekend was rounded off by sets last night from The Who and Roger Waters — whose own surprise was the appearance of Republican Presidential candidate Donald Trump flashing on the giant screen — while the second weekend will start October 14 at the Empire Polo Club in Indio, California. Tickets are on sale now.