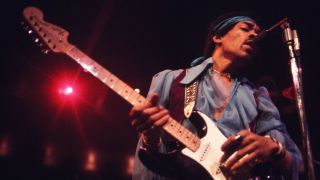 Before we get into the history of the Fender Stratocaster, the biggest selling guitar, and easily the most ripped-off six-string design of all time, let’s put something to bed. While this amazing instrument has been used and often abused by everyone from Buddy Holly to Buddy Guy, Rory Gallagher to Stevie Ray Vaughan, its finest moment came at the hands of Jimi Hendrix. Listen to Jimi’s tone on the intro and solo of Hey Joe. That record couldn’t have worked with any other guitar. The tone is every bit as important as the lyrics and melody.

Jimi’s tone was partly down to the pickups in his Strats. He favoured late 60s models which actually had the weakest singlecoils that Fender produced over the years. These so-called “Grey-Bottom” pickups - so named because of their fibre board bobbins - are now highly prized as a step closer to Jimi’s tone. The secret is, low output pickups allow the guitar’s natural acoustic tone to shine through in a way that fire-breathing overwound pups can’t. It’s not about volume. It’s all about the tone.

Hendrix was a huge influence on the man who helped put the Strat back on the map in the 1980s. Texan blues icon Stevie Ray Vaughan often mimicked Jimi’s tone, and covered a bunch of his idol’s songs. That said, his hot Texan Strat blues tone became hugely influential on guitarists that followed in the wake of his death in 1991. To hear the master at his best, check out his incredible tone on Pride And Joy.

Strat history 101: While the Fender Telecaster was doing brisk business in the early 50s, some guitarist felt that it was missing some important ingredients. They wanted a third pickup for more tonal variety and a vibrato unit. Some took to fitting a Bigsby True Vibrato to their Teles, but Leo Fender thought he could come up with something better.

The result was the Stratocaster. Launched in 1954, it had three singlecoil pickups, a brilliantly simple “Synchronized Tremolo” unit, and a sleek contoured body that contrasted sharply with the slab-like design of the Telecaster. It retained the Tele’s removable maple neck, albeit with a larger headstock, a feature designed to make the guitar easy to repair. At that point, Leo thought if you broke the neck or wore the frets down, you could just buy a replacement. This is something that vintage collectors find inconceivable now.

The Strat went through a few changes, most significantly the switch from a maple to rosewood fingerboard in the late 50s, a period that also found Fender offering custom DuPont finishes like shell pink, Dakota Red and Lake Placid Blue, the same colours sprayed on the cars rolling off the production line in Detroit. This clever marketing tool, along with matching headstocks, helped eclipse the sales of other US guitar brands like Gibson, Rickenbacker and Gretsch.

While the Strat was given a huge boost by the patronage of Buddy Holly in the late 50s, it also became the guitar of the early 60s surf scene,, mainly thanks to the sound of Dick Dale. The King Of The Surf Guitar defined the reverb-soaked, amps cranked to hell sound on his classic Pulp Fiction number, Misirlou.

Speaking of instrumental classics, the man most responsible for selling the Strat’s virtues in the UK, is Hank Marvin of The Shadows. An unlikely guitar hero, he looked a bit like Postman Pat, Hank nevertheless came up with a classic sound on early 60s pre-Fab Four era hits like Apache.

It looked like the Strat was to be the guitar of the 60s but The Beatles’ love of Gretsch and Rickenbacker was to prove otherwise. Like the guitar it once defeated, the Gibson Les Paul Standard, the Strat was on its way out.

It’s ironic that the man most responsible for saving the Les Paul’s arse in the 60s, Clapton turned his back on humbuckers in favour of the Fender singlecoil for the remainder of his career. Yes, we realise his career is technically still ongoing but he’s unlikely to switch his allegiance back to Gibson guitars at this late stage.

Anyway, after Jimi it was Eric Clapton helped put the Strat back in business with possibly the second greatest guitar intro of all time. It’s the riff Jeremy Clarkson hears in his head every time he fires up a Ferrari. Yes, Layla by Derek And The Dominos, featuring Eric and Duane Allman duelling at beginning is played on Clapton’s ‘56 Strat - serial number 12073 - that became best known as “Brownie”.

He bought the guitar at Sound City in London when he was still touring with Cream. It wasn’t even his most famous Strat. That honour goes to “‘Blackie”, a guitar assembled from the the best bits of three Strats he bought at the Sho-Bud guitar shop in Nashville, Tennessee. He actually purchased six 50s era Stratocasters that day, for no more than $300 a piece.

After gifting three of the guitars to George Harrison, Pete Townshend, and Steve Winwood, he took the three remaining 56⁄57 models to Nashville Luthier Ted Newman Jones to butcher for one great guitar. Why “Blackie”? Well, it was black. The mid 50s Strats have an unusual V neck profile, something that found its way onto the later Fender Eric Clapton Signature Stratocaster, a guitar also loved by his old mate Pete Townshend.

We know the Strat is a tone machine. Just look at the player’s that have, well, played one. Jeff Beck, David Gilmour, Eric Johnson, Rory Gallagher and the rest. Special shout outs go to Mark Knopfler’s amazing Strat tones on Dire Strait’s Sultans Of Swing and George Harrison’s beautiful slide tone, played on his psychedelic Magical Mystery Tour Strat “Rocky” tone on sings like This Is Love. Yep, even the man who sold a million Gretsches at the height of Beatlemania eventually fell in love with a Strat.

The Guitars That Built Rock: The Gibson Les Paul