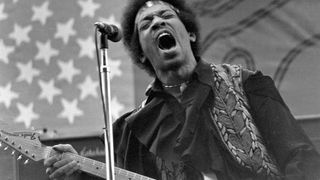 There are countless covers of Dylan songs, done by artists of all shapes, sizes and musical styles. Some are dreadful, some are good, and one or two of them might even give Dylan’s originals a run for their money. Here are some of the best…

1. The Jimi Hendrix Experience – All Along The Watchtower (1968)

Even Dylan admitted that this version bettered his original, found in a more rustic guise on his 1968 LP John Wesley Harding. Hendrix dialled up the rage and channelled that through his guitar. It sounds as if he were giving chase to the hounds of hell.

A Dylan fan since the 60s, Plant tipped his hat via this faithful but impassioned cover of a standard-bearer from Dylan’s 1976 classic Desire. The original epitomised that album’s expansive folk-rock leanings, and proved an ideal fit for Plant’s voice.

Originally the centrepiece of 1964’s trailblazing Another Side Of Bob Dylan album, and here ramped up to the twice the speed but delivered straight-faced and with gleeful intent by da Brudders, as if it were meant to be wearing a sneer, a leather jacket and drainpipe jeans all along.

The archetypal Dylan protest song was revived by Eddie Vedder and Mike McCready at a Dylan tribute concert at Madison Square Garden in 1992. The air of doom hangs just as heavy in their stately acoustic take.

Dylan’s 1967 original on the Bringing It All Back Home album was acoustic but laced with bile. LA rap-metal collective RATM retained this latter dose but set it to a thunderous electric soundtrack that sounded like walls exploding – or blood vessels, in the case of Zack de la Rocha’s incandescent vocals.

One of a handful of stirring moments from Dylan’s 80s return to form Oh Mercy, the hymn-like Ring Them Bells popped up again four years later on a so-so Heart album. Even so, Ann Wilson was moved to deliver a celestial vocal and the song soared again.

Sculpted to the consistency of a breath of air by Oh Mercy producer Daniel Lanois, and read by Harris as if it were the 11th testament, one of Dylan’s greatest ballads, almost buried on 1981’s flailing Shot Of Love, was in their hands rightfully restored to glory.

Serial Dylan interpreters The Byrds never did Bob better than on this urging, evocative take on Bringing It All Back Home’s closing track, meshing their splendorous harmonies to a heartfelt lyric of loss and longing and conjuring magic in the process.

Picking up one of Dylan’s many discarded gems, the US alt.country crew inserted it into the heart of their third album, Secret South, a bleak, black gothic gem brought briefly into the light by the dazzling rays of this song.

Brothers in contrary-old-coot arms and once creative rivals bent on outdoing each other, Dylan and Young are now like two veteran gunslingers forever roaming the plains. Young chose this sprawling set-piece from 1965’s landmark Highway 61 Revisited as his tribute wisely, since it gave full vent to his roaring guitar and sent him ranging off into the sunset like a man possessed.