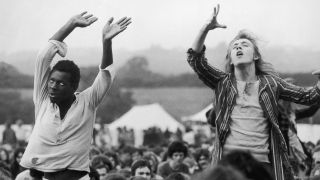 It was meant to be something else. Bob Dylan had been lured out of retirement by the festival’s promotors (he was paid £35,000) after three year’s near-seclusion in the Catskill Mountains, and the rumours started almost immediately: The Beatles were going to join him onstage.

The rumours weren’t entirely without foundation. George Harrison visited Dylan during his rehearsals for the event, and John Lennon and Ringo Starr arrived on the island the day before he was due to take the stage. In the end it never happened, and the three Beatles settled for watching Dylan’s set from a VIP enclosure close to the stage, where they were joined by Keith Richards, Charlie Watts, Eric Clapton, Elton John and Syd Barrett, plus an A-list celebrity line-up including Liz Taylor, Richard Burton, Jane Fonda, Françoise Hardy, Roger Vadim, Elton John and Terence Stamp. Dylan’s set — “You had to be a musician to understand it,” said Clapton — was later released as The Bootleg Series Vol. 10: Another Self Portrait (1969–1971).

Other highlights included headline sets from The Nice (Friday night) and The Who (Saturday), and a PA so bad it’s surprising the audience didn’t revolt. “The acoustics were so bad that I couldn’t even hear our drummer,” said Ged Peck, guitarist in Marsha Hunt’s band. “So goodness knows what the audience were listening to. We appeared to go down well, although I suspect that this was because many of them were so stoned that they didn’t know any different.”

One of the more bizarre moments of the weekend was at the climax of The Who’s set, when several enormous phallic balloons were meant to ejaculate foam into the air. Instead, a huge cloud was blown directly into the audience, who proceeded to get lathered up in the discharge, creating an instant “soapy happening”.

All in all, the festival was a huge success, despite the £120,000 spent on expanding the size of the site, building a new stage, and flying Dylan and The Band in from the US. In 1970, they’d go again.

Our gallery of Festival Highlights is below.