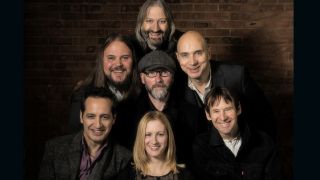 Big Big Train will go on a Grand Tour in May (Image credit:  Sophocles Alexiou)

The follow-up to 2017’s Grimspound and The Second Brightest Star is titled Grand Tour – and it’ll be released on May 17.

Following those releases, the band revealed that they intended to move on from writing music based on the “English landscape, the people that work on the land and their folklore stories.”

And the inspiration behind Grand Tour has been drawn from the 17th and 18th century custom where young men and women travelled across the world to broaden their minds, with the record focusing on “songs set in distant lands and beyond.”

Big Big Train drummer Nick D’Virgilio says: “There are songs inspired by the legacy of the Italian Renaissance genius, Leonardo da Vinci, songs telling the story of the rise and fall of Rome, of the beautiful mosaics of Ravenna, and of the shipwreck of a great poet, lost in a tempest off the coast of Italy. Along the way, the story of mankind’s greatest ever journey is told."

Vocalist David Longdon adds: “Grand Tour is a celebration of the human experience, of science and art, and of what it means to be alive.”

The album will be released on double heavyweight gatefold vinyl, which will come with a 24-page booklet, on digipack CD featuring a 52-page booklet, as standard and hi-resolution downloads, and on streaming platforms.

Big Big Train will head out on the road across the UK later this year with special guests Sweet Billy Pilgrim.